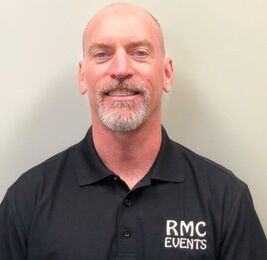 Chris joined RMC Events in May 2019 after retiring as a Lieutenant from the Henrico County Police Division.  During his nearly 30-year career, Chris held various positions in Patrol, Criminal Investigations, Homeland Security and in the Office of the Chief of Police as the public information officer.  Chris was a supervisor for over half of his career and attended both the Public Safety Institute at VCU and the Administrative Officers Management Program at North Carolina State University.  He was certified by the Virginia Department of Criminal Justice Services as a general instructor, speed measurement instructor and an SFST/DUI instructor.

Chris is attended VCU where he received a Bachelor of Science degree in Administration of Justice and a Master of Science in Criminal Justice. As an undergrad, he also played baseball for the Rams.

Chris is a life-long resident of Henrico and has been active in his community.  He coached baseball in the Glen Allen Youth Athletic Association and on travel baseball teams.  He also spent ten years on the board of trustees at the Glen Allen Community Center, serving as President for the last four.  Chris enjoys golf, exercising, traveling and spending time with family.  He and his wife, Michele, have two children and live in Glen Allen.