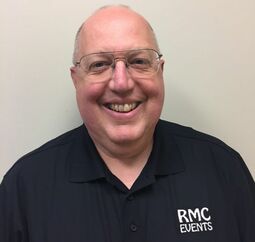 Dave joined RMC Events in June of 2013 as one of our event staff in the Charlottesville Region, after a career as an NCO in the US Army (Signal Corps) and after separating from the military working for one of the largest defense contractors in the world.
Dave lived and went to college in Oregon before joining the military, which brought him to the East Coast via a stop in Denver to teach college level courses at the College of the Air Force. He was then assigned to the Military District of Washington DC.

Dave was one of 400 people reviewed for a position with the White House Communication Agency, with 70 people interviewed for the position and Dave getting the single position offered of Staff Photographer to the President of the United States.  He worked directly for President Reagan and Vice President George Bush and traveled the world documenting the US Presidency.

After leaving the White House, Dave joined a large defense contractor in the Systems Engineering division and eventually retired as the Consulting Configuration and Data Manager after 28 years. During this time Dave joined the local volunteer Rescue Squad. He became involved as a volunteer in emergency medical services, and is a licensed Emergency Medical Technician in the Commonwealth of Virginia. Dave currently serves with the Madison County Rescue Squad (MCRS). He is a life member of MCRS and during this time held several positions including Captain, 1st Lieutenant, Executive, and is currently on the Board of Directors for the Squad.

With RMC, Dave was assigned working in the JPJ Security office for a number of years and managing the Observation Post for UVA football games.  With the beginning of the Ambassador Program in January 2016, Dave moved over from the JPJ Security Center to join the very first class of Ambassadors to run the Command Center for the Ambassadors, and has been full time with the program since Ambassador Program's inception.  In April of 2016, Dave took on the role of our overnight Shift Lead until September of 2017 when he moved over to Day Shift to run the Shift and become the logistic point of contact for the Substation and local Ambassador office.  As an Ambassador with RMC, one of the highest compliments is the University students and community thanking the Ambassadors for “keeping me safe” and “We appreciate you folks so much for being out here at all hours” and give them high fives as "thank you"s.

Dave met and married a farmer’s daughter over 30 years ago and has 1 son and 2 daughters.  His son is the Sports Information Director for Randolph Macon College, one daughter teaches second grade in the local area and the other daughter is married to a crew chief on KC-135 Stratotanker at McConnel AFB in Wichita, Kansas. Dave and his wife reside in Madison, Virginia.