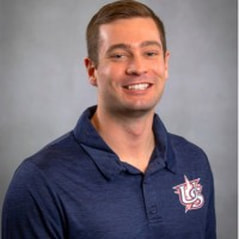 Jack joined RMC Events in September 2021 as an Account Manager for the Richmond Office. Jack is a native of Chesapeake and a graduate of Greenbrier Christian Academy. After high school, Jack played collegiate baseball at Randolph-Macon College, where he was a part of the Yellow Jackets’ 2018 NCAA Division III College World Series team. Jack graduated from R-MC with a Bachelor of Arts in Business and a minor in Communication Studies. He also earned his Master’s in Sport Leadership from Virginia Commonwealth University.
Prior to RMC, Jack has worked in various seasonal internship roles with the New York Jets and USA Baseball. While with the Jets, Jack provided operational support to the Football Operations Department during the 2017 and 2018 Training Camps. With USA Baseball, Jack worked as an operations intern for the 12U National Team, 15U National Team, and the National Team Championships. He currently resides in Richmond. When not at work Jack enjoys watching sports, playing guitar, and exploring new food options throughout the city.