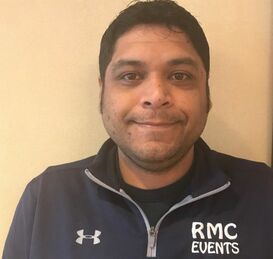 Jerry Leon currently serves as an Account Manager for our Western External Programs, specifically within the Ambassador and P&T programs, at the University of Virginia and is based in the Charlottesville, Virginia Public Safety Substation on the UVA Corner. In this position, Jerry is directly responsible for the management of not only our Ambassadors who patrol the Corner and surrounding area 365 days per year, but also our Safe Ride and UVA Hospital staff. Jerry holds certifications through VA DCJS and DHS and has been a supervisor with RMC since January 2011. Jerry believes, “commitment to a high quality of service and interpersonal relationships characterized by respect, openness, and genuineness are essential to get any job done well.”

Jerry is from Forest Hills, Queens, but has called Charlottesville home since 2009. In January of 2018, Jerry and his wife became the proud parents of twins.

Between his career history at the John Paul Jones Arena and several years of supervising UVA events through RMC, Jerry's time in Charlottesville has centered around his commitment to serving the UVA community.