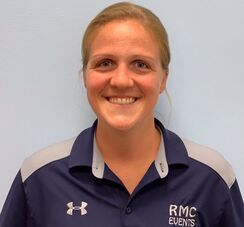 Kristen began working with RMC Events in 2008 as a member of our part time event staff. While working as a Event Staff she quickly noticed the feeling of family within RMC and felt lucky to be a part of the organization. In August 2019 Kristen returned as the Administrative Coordinator for our Western Events Operations Department.  In this role she serves as a support for all the members of the Western Region Event Operations, provides effective coordination of efforts between the Western Region and other organizational departments, and serves as a resource for part time staff.

Although she wasn’t born in Charlottesville, it has always felt like home. After graduating from Monticello High School in 2005, Kristen attended Mary Baldwin College where she received her Bachelor’s in Sociology/Social Work. After graduating college in 2009, Kristen traveled the world, getting to visit Australia, New Zealand, and Hawaii. Travel is a huge passion of Kristen’s and she has visited 8 countries other than the US.

In 2011 Kristen worked as an Autism Para Professional in an Elementary school for a little over one school year. In October 2012 she left her job as an Autism Para Professional after the birth of her first daughter to be a Stay at Home Mom. In December 2014 Kristen had another daughter and continued as a Stay at Home Mom. “It has been a true blessing to be able to Stay at Home with my daughters as they grow up.” When not at work you can find Kristen with her girls, exploring outside or hanging out with friends