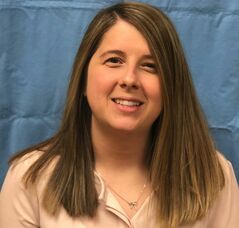 Liz Greenhalgh joined RMC Events as Human Resources Manager of External Operations in April of 2018. In her role she handles external operations to included recruiting, communications, application process, and hiring of new staff members.  Prior to joining RMC, Liz worked within the Virginia Commonwealth University Police Department (VCUPD) for 7 years. There she held several roles, more specifically she served in the police Academy where she handled hiring of new police officers and maintaining of police records. Prior to working within VCUPD, Liz worked over 9 years in a variety of legal roles such as holding positions within the Commonwealth Attorney’s Office and at The Dow Chemical Company.

Originally from Bay City, Michigan, Liz graduated from Central Michigan University in 2008 with a Bachelor of Science degree in Sociology and later earned her Master of Science degree in Criminal Justice. In 2011, Liz and her husband Greg relocated to Richmond and have recently settled into the Glen Allen area with their daughter and pet Weimaraner, Quinn and Miley. In her free-time, she enjoys training for half marathons and spending time with her family.
“Everyone at RMC Events has created an exceptional organization culture, I’m honored to be a part of it each and every day!”