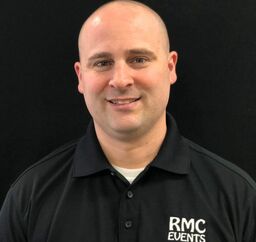 Marc Sartori has been with RMC Events since April of 2008 when he began as a member of our part time event staff.  After just a few months, he was offered a position on our full time staff, as an Event Manager.  As an Event Manager, Marc was responsible for several accounts including Virginia Tech, Martinsville Speedway, Virginia Commonwealth University, and Colonial Downs. In January 2013, Marc became the Regional Director of Eastern Virginia Operations for RMC Events whereby he manages the daily operation of our Eastern Virginia region and their 4,000+ annual events. This work entails the coordination of 6 account managers, 100+ supervisors, and over 1000 part-time event staff.  Marc’s region includes the areas of the Commonwealth from Richmond to the Eastern Shore with the addition of any events occurring outside of the Commonwealth.

Prior to working for RMC Events, Marc served as an event director for Bike Walk Virginia, an assistant lacrosse coach for Randolph-Macon College, and as a teacher/coach for Hanover County Public Schools.  Marc has a Bachelor of Arts degree from the University of Richmond and a Master of Science degree from Virginia Commonwealth University.

In his time with RMC Events, Marc has coordinated thousands of high school, collegiate, & professional events.
Marc is a fan of anything related to sports and food.   He resides in Mechanicsville, VA with his wife Michelle, their daughter Lucy, and their son Gray.  According to Marc, “the most important event is the one that we are working at that particular moment.  A truly successful event requires everyone’s complete focus and attention to detail.”