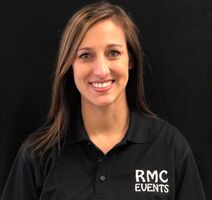 Mina joined RMC Events as an Administrative Coordinator for our Eastern Events Operations Department in January 2019. She is responsible for all the Eastern Virginia Event Operations schedule processing, mobile app alert & e-blast development, publishing the weekly Behind the Barricade newsletter design and distribution, and assisting the department with various projects as needed.

Mina has held several key administrative and management roles which has led her to be well-rounded in her field.  She has supported college professors, pastoral staff, a president of a small business as well as owners of a small private equity firm. She prides herself on her organization and customer service skills. She truly enjoys being part of the RMC family.

Originally from Puerto Rico, Mina moved to Richmond when she was just 5 years old. She has enjoyed watching Richmond grow into the incredible city that it is.  She attended Virginia Commonwealth University as well as ECPI College and has a degree in IT/Web Development. Mina resides in Glen Allen with her better half Tony and their active crew of 5 beautiful children. She enjoys running, exploring new cities, museums, outdoor concerts, growing in her faith and sports. She’s a loyal to the VCU Rams, Pittsburgh Steelers, and patiently waited 18 years to see her favorite hockey team win the Stanley Cup. GO CAPS!