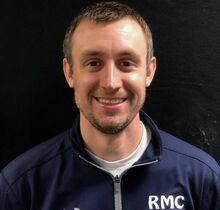 Patrick joined RMC Events in February 2018 as an Account/Event Manager for the Charlottesville Office.  In this role, Patrick is responsible for managing our personnel and operations for a multitude of clients in the Charlottesville Region, including John Paul Jones Arena, UVA Athletics and the Sprint Wireless Pavilion.

Originally from Connecticut, Patrick moved to Virginia in 2011 upon completion of his undergraduate and graduate degrees from Seton Hall University.  From 2011 to 2018, Patrick worked with the Richmond Flying Squirrels Baseball Team (AA-affiliate of the San Francisco Giants) where he held multiple roles, including most recent Executive Director of Ticket Operations.  Patrick currently resides in Richmond, Virginia and when he isn’t working, can be found cheering on his New York Giants, Boston Celtics and New York Yankees.