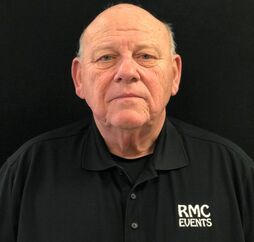 Sam joined the RMC Events team in 2003 and has worked many venues across the markets as a supervisor and event manager.  He has staffed the RMC command post for several years at events such as VT Football, NASCAR at RIR,  SFVA, and U2 at UVA to name a few.

A native Virginian, he grew up in Newport News near the campus of CNU. After graduation he moved to Richmond to work for the Virginia State Police as a dispatcher then transferring to trooper. Sam retired for the first time from Alcoa (Reynolds Metals Company) in Richmond where he was a team leader and project manager in the Information Systems department.

After his retirement he worked as the Operations Manager for Paul Sawyers Lawn Equipment then as the General Services Manager at a large retirement community where he was responsible for transportation, security, grounds, and event setup. He was also responsible for the upgrade and maintenance of the life safety systems, working closely with local government to make sure the facility met all regulations. He retired from Cedarfield in August 2012.

Sam became involved as a volunteer in emergency medical services after moving to Richmond. He completed one of the first EMT courses held in Virginia. Locally he served with the Manchester Volunteer Rescue Squad in Chesterfield for over 25 years holding several positions including President, Vice President, and Chief of Operations. As the operations chief he had responsibility to insure members and equipment were in compliance with regulations from the Office of Emergency Medical Services. Sam was instrumental in developing the Vehicle Extrication course for the governing body of volunteer rescue squads and the Office of EMS. He is a Life Member of Manchester as well as the Virginia Association of Volunteer Rescue Squads.

In recent years he continued education in emergency services by completing FEMA courses IS-15 Special Events Planning, IS-100 Incident Command System, IS-700 National Incident Management Systems, IS-907 Active Shooter-What can you do?.  He attended and completed training in Henrico County for the Community Emergency Response Team (CERT), Citizens Fire Academy, Associate Fire Marshall, and Train the Trainer for Fire Extinguishers.
​
Sam and his wife Rene, also a RMC team member, live near Elmont in Hanover County. Their children and grandchildren all live in the Richmond area.