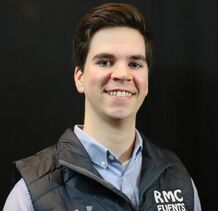 Trace graduated from George Mason University in 2016 with a degree in Marketing. Outside of the world of RMC Events, Trace is a published children's author of a book series written to help kids with disabilities. He is also an ambassador for a nonprofit that helps kids with limb differences, as well as an ambassador for renowned bionics company Össur, who built the bionic arm he often wears. Trace lives in Richmond, Virginia with his loving 3d printer and Xbox.