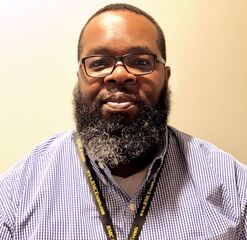 Yul joined RMC as a part time staff member in the Fall of 2011. After working his first event, he knew he was with the right company.  Early the next year, Yul moved into a Supervisor role for the company and as they say the rest is history. Working many different events such as, the Maymont Jazz Festival, Stone Soul Concert, and 2nd Street Festival increased his love for the event life. After speaking with several Event Directors, he took the leap into a new venture of life and applied for an Asst. Account Manager role. In late November 2019, Yul became an Asst. Account Manager for External Programs.

For almost three decades, Yul has been happily married to his wife, Scholar, and has two daughters.  Yul grew up in Madison, North Carolina and joined the U.S. Navy in 1988 as an Aviation Structural Mechanic, where served until 1992. He and his family moved to the Richmond area in 1996, where he worked the State Board of Elections and Capital One prior to coming to RMC Events.